In Australia, different methods have been used for replenishing the groundwater sources in the aquifers and storing water underground such as Managed Aquifer Recharge (MAR) and Aquifer Storage Recovery (ASR). To carry out those methods, any suitable sources of water either naturally or artificially inject into the target aquifer to rise the groundwater level. The below schematic figures are presented the details of the MAR and ASR schemes. 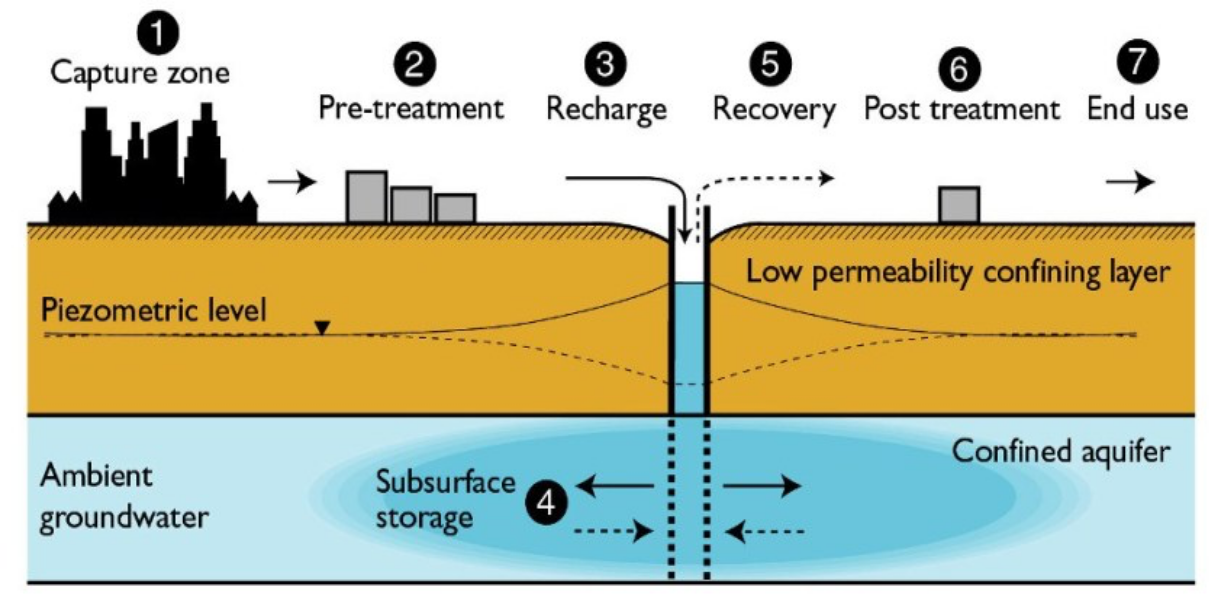 This video used under permission from the ABC. They have been informed that the aim of putting this video on our website is only specifying the differences between the Minderoo project and what we offer at Aquor for our audiences. This documentary is not used for business promotion purposes.

What is the Subsurface Dam?

The subsurface dam is a hydraulic structure which is constructed underground in a surrounded valley by hills to dam up groundwater and make underground non-evaporative basin. The components of the subsurface dam are almost similar to the surface dam, including crest, overflow section, dam body, foundation, intake facilities, and flood control system. 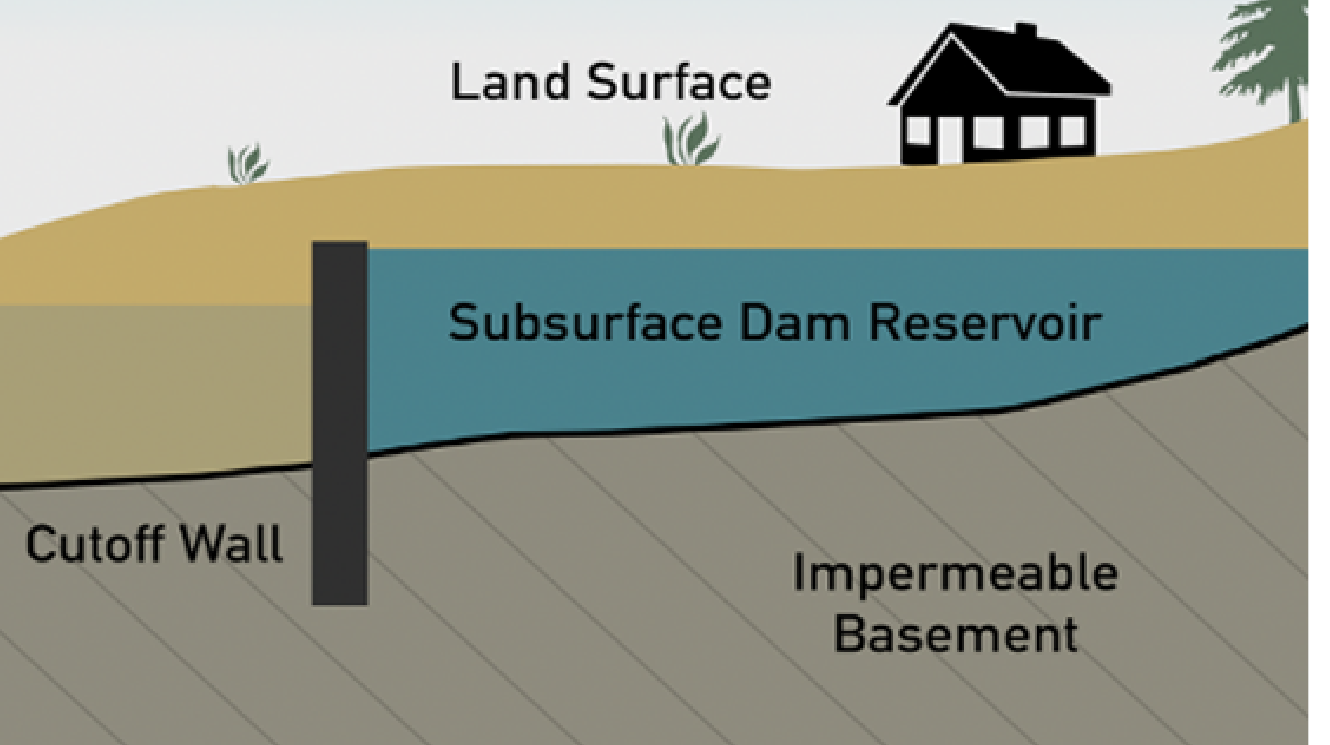 The birth and the development of the subsurface dam

The subsurface dam scheme has initiated and has reached its maturity in Japan for the last few decades. In the 1970s, the government of Japan was seeking new options for securing the water supply of Okinawa for the regional development purposes. At that time, the only source of water in Okinawa was groundwater, and to access to that source, it was essential to digging deep wells.
‍
Accordingly, to rising the groundwater level and making reliable water supplies, the idea of damming up groundwater in an aquifer by an underground cut-off wall was initiated. Prior to the beginning of prototyping, that idea was tested from many perspectives including hydrogeological questions, hydraulic properties of the aquifer, groundwater balance, construction methods, the impacts of rising water level, and flood analysis. 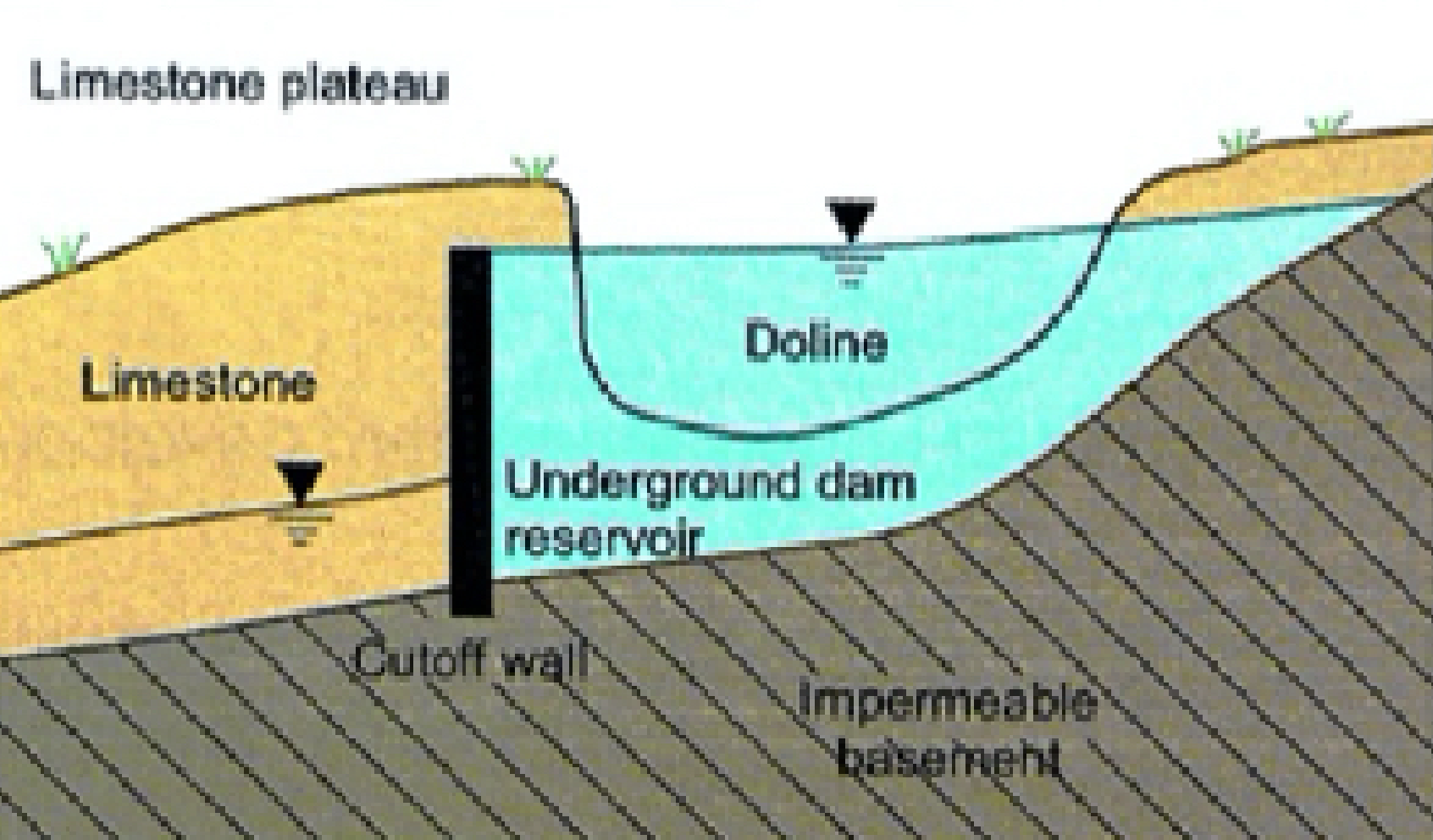 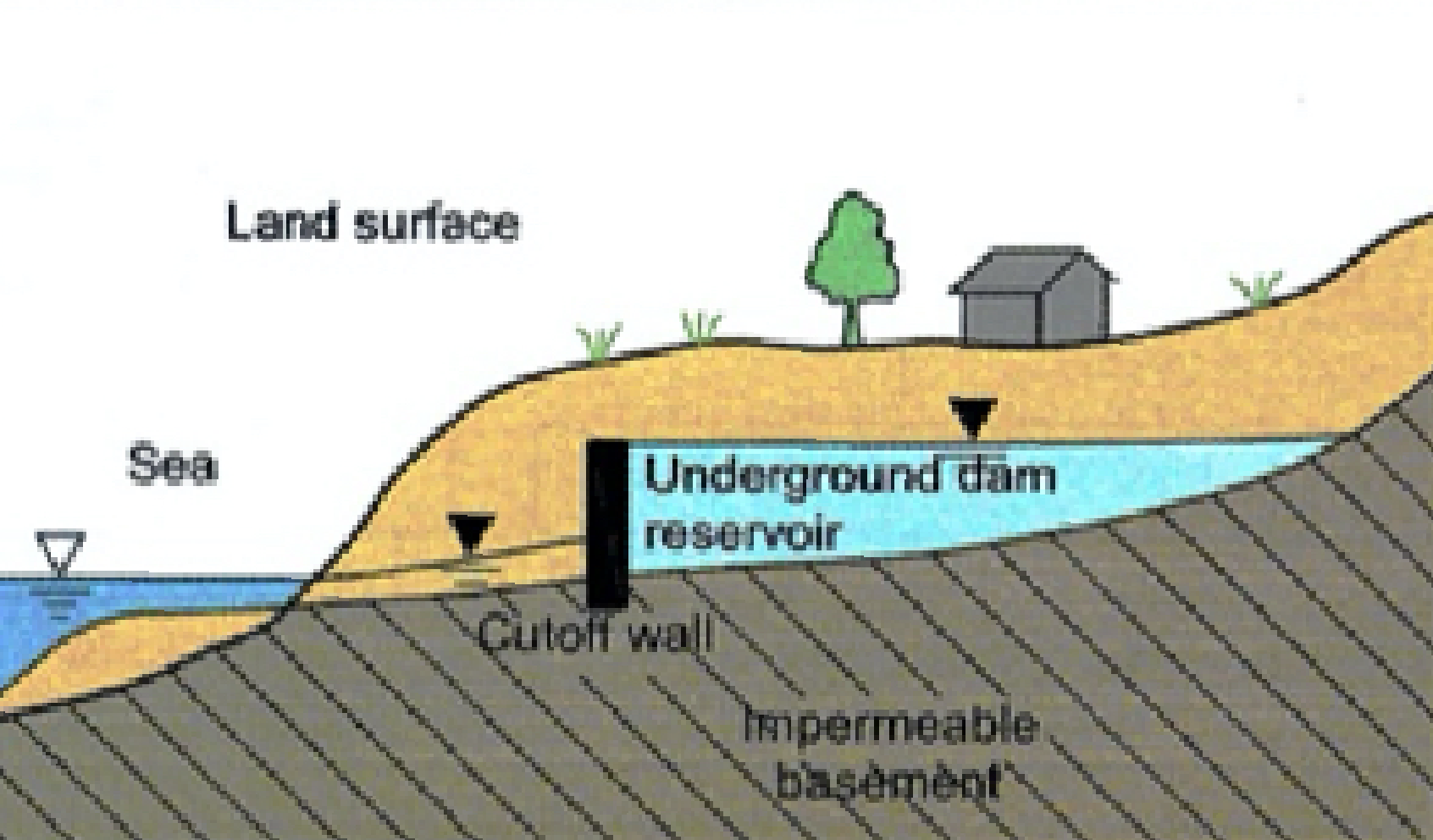 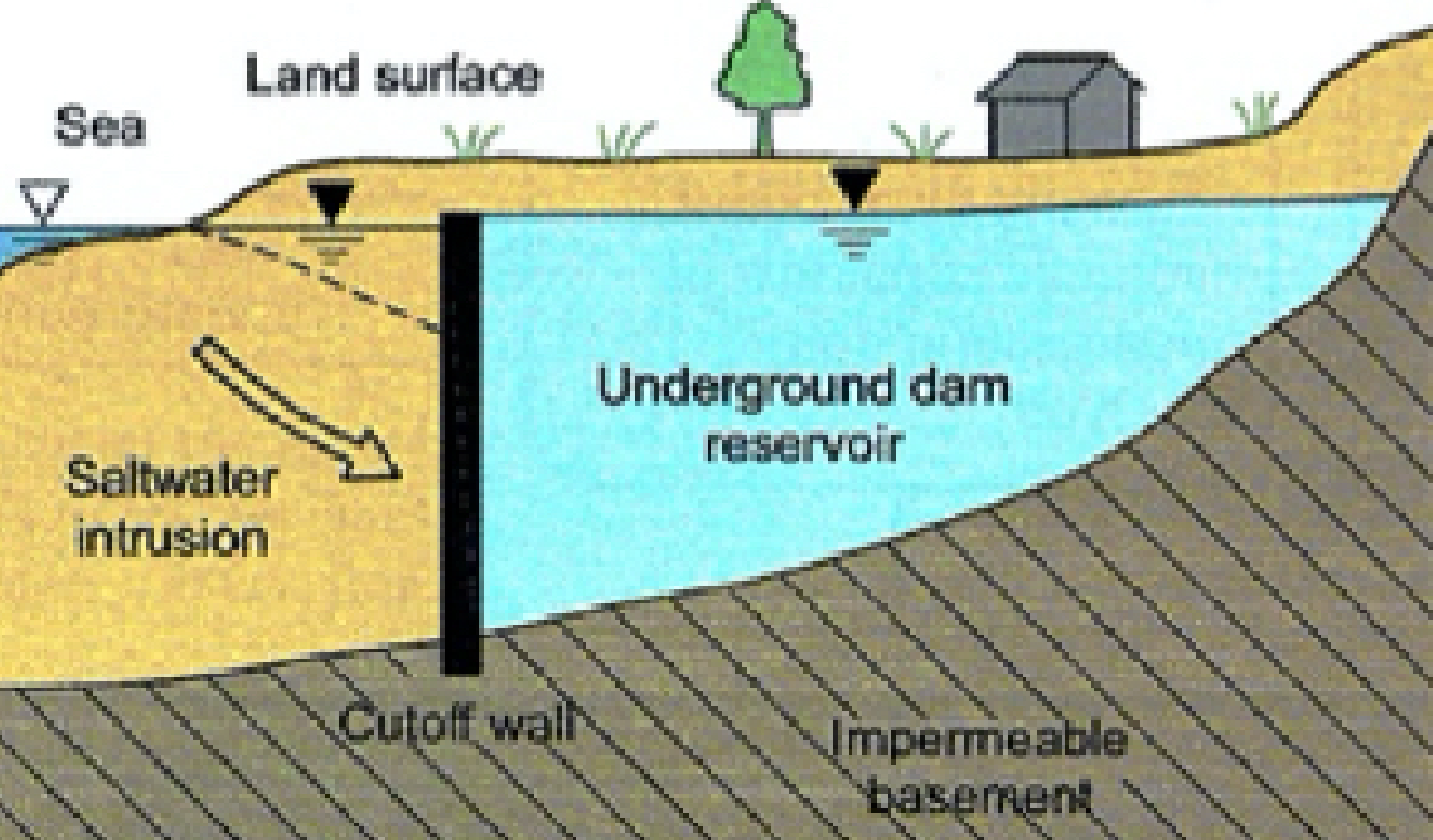 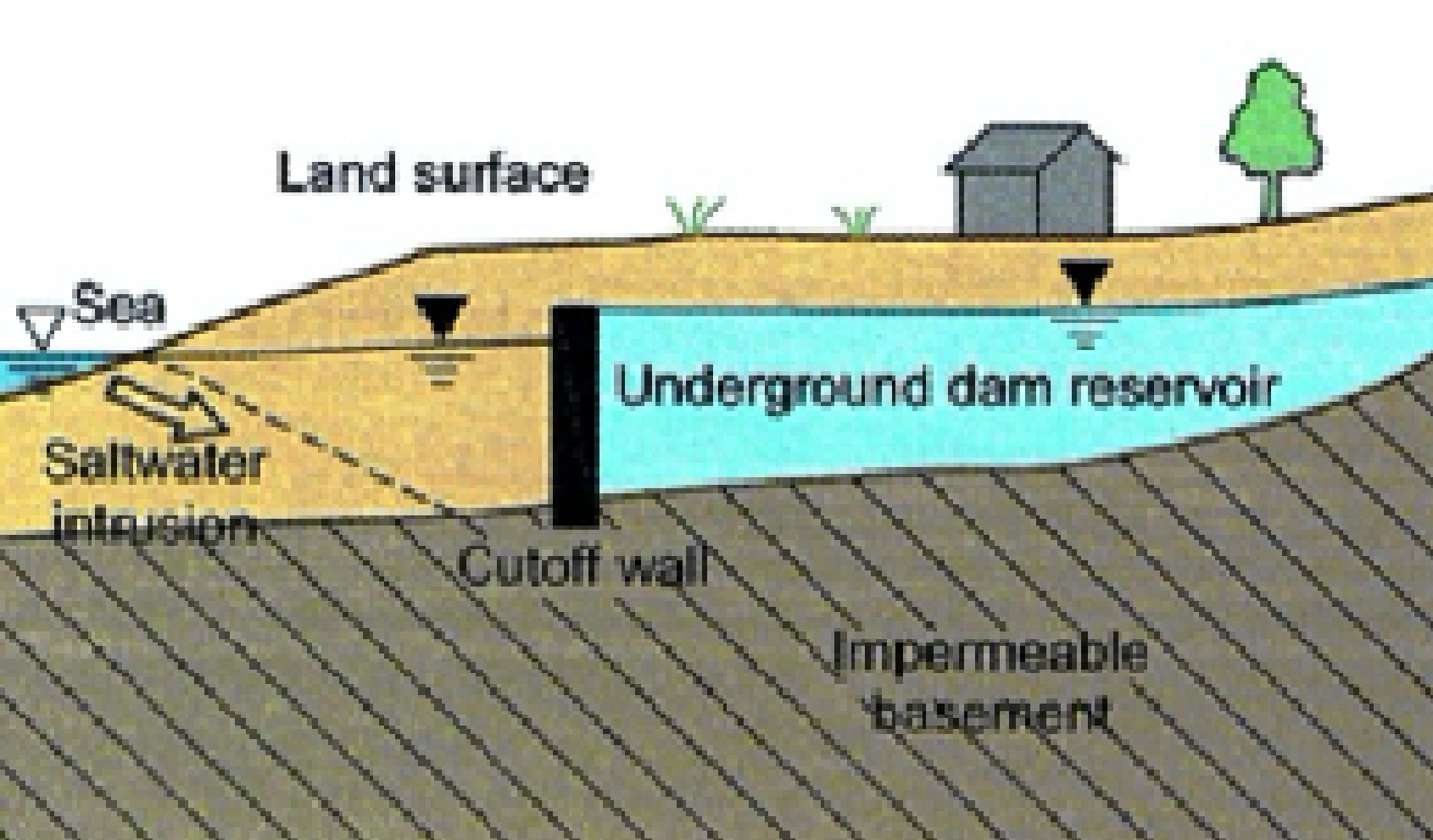 The value propositions of the subsurface dam

The subsurface dam offers multiple value propositions such as:
‍

The environmental impacts of the subsurface dam scheme

The subsurface dam could raise the environmental concerns among the stakeholders regarding the possible environmental impacts of building the scheme on the target basin. Here, the possible impacts and the countermeasures of them that have to envisage are briefly enumerated as follow:
‍
In the upstream side of the basin, after the completion of the project, the groundwater level gradually rises to the top of the crest of the subsurface dam and overflows to the downstream. Here, the concern is rising the groundwater level to the surface level, which could lead to the salinity problem due to evapotranspiration and flooding during heavy rain. To avoid any impacts on the upstream, the height of the cut-off wall has to adjust with the critical water level to preventing the groundwater level goes beyond the critical level. Those factors take into consideration during the hydrological analysis and the design process. In addition to adjusting the height of the cut-off wall, a flood control system could be considered to design, build and operate during heavy rain to avoid rising the water level above the critical level.

The commercial viability of the subsurface dam scheme